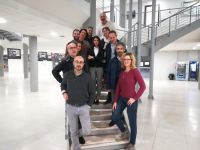 Roman routes consortium was in Lecce (IT) for the Kick Off Meeting of ALL ROUTES LEAD TO ROME, an Erasmus+ Project.

Roman routes consortium was in Lecce on November 28th, hosted by Italian Partner University of Salento, for the Kick Off Meeting of ALL ROUTES LEAD TO ROME, a Project co-funded by the Erasmus+ Programme of the European Commission which involves a Consortium of 8 Partners from 5 countries (Belgium, Italy, Greece, Macedonia and Spain).

The goal is to enable university students to identify and pursue the best strategies to maximize the economic return of the ancient routes network, develop basic and transversal skills such as self-reliance, leadership and ability to work in groups, problem solving, mastering of digital skills and multilingualism.

At the meeting, Partners introduced themselves in a brief presentation, then administrative aspect were dealt with, the Open Educational Platform which will be available in all the languages of the Consortium was discussed, along with Dissemination and Exploitation tasks to let the project known in the EU territory.